Department of Statistics and Demography (room 238/2)

e-mail of the Department:  kaf_stat@ukr.net

e-mail of the Organizational Committee:  conference_stat@ukr.net

1. From the railway station

You can arrive to Faculty of Economics by subway from the “Central” and “South” terminals of the railway station. You should move from subway station “Vokzalna” to station “Kreschatik” (the red direction of subway). Then you need to transfer to station “Maidan Nezalejnosti” (blue direction) and move to station “Vasylkyvska” (Kiyv subway map). 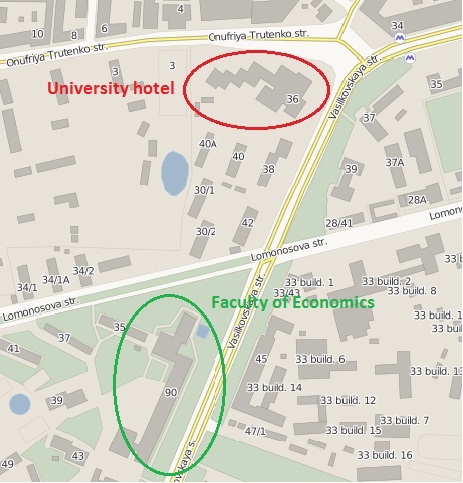 You can arrive to Kiyv from airport “Boryspyl” by buses of the company “Sky Bus” that departs from terminals B, D and F (buses timetable is given below). Parking of Sky Bus near terminal B is situated opposite and slightly to the left of the terminal central entrance. Parking is hard to be ignored, because the buses “Sky Bus” have bright and original coloring and inscriptions “Sky Bus” on their sides.

Buses “Sky Bus” stop on the first line near terminal F. Stop of “Sky Bus” is situated slightly to the left of the terminal central entrance. Even if You don’t observe any bus on the stop - don’t worry - it means that a bus has already left and the next one will drive soon. The bus stop of “Sky Bus” near terminal D is situated near arrival hall exit, if You travel to Kiyv and on the second level of the overpass near the departure hall of the terminal D if You travel from Kiyv.

Cost of travel is 25 gryvnas (about 4 USD), tickets can be purchased from the driver. You can move to the nearest subway station “Kharkyvska” by bus.

Timetable of buses that depart from international terminals B and F.

If You move to Faculty of Economics by taxi, the travel costs are: